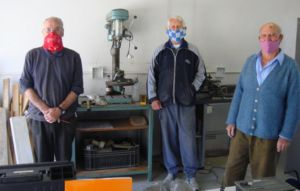 The well-equipped workshop is a result of a proposal made to the village’s manager, Esmé Erasmus, in May.
In line with RAA’s Eden Alternative philosophy to promote ageing as an extension of life’s joys rather than a slippery slope to oblivion, Esmé met with the village’s acting chairperson, Dave Webster, to discuss the proposal. It was decided that it could be a practical proposition.

A pair of storerooms in the village could be made available and, if the wall between them was demolished, it would result in a practical size for a workshop.

A quotation was obtained to knock down the wall and install two windows in the back wall for additional light and ventilation. The cost was R26 000, an amount that was within the Thornhill Village Fund’s capabilities.

The expenditure was approved by village residents and the contractor moved onsite early in July. Money for the Village Fund is raised by residents through a number of fund-raising activities, including the highly successful annual Family Fun Day and Fete which, last year, raised over R30 000.

Equipment for the workshop has all been donated by residents and includes wood- and metalworking lathes, drill press, band saw, circular saw, specialist grindstones, many hand tools and some very nice timber.

Due to the pandemic, social distancing is enforced in the workshop, so it’s necessary to book time in advance. Masks and sanitisers must also be used.

Prior to the official opening, which was a very low-key affair due to the virus, resident Al Zylstra and Johnny van Leeuwen had undertaken 26 projects, ranging from repairs to toasters, knife sharpening and carpentry of various degrees of difficulty.

They also completely refurbished 24 bridge tables for the village bridge club while the club was in recession. Another planned project is a custom-built cupboard to house occupational therapy games in the Thornhill Community Centre. “We make every effort to facilitate many different occupational and therapeutic hobbies and pastimes,” says Esmé.