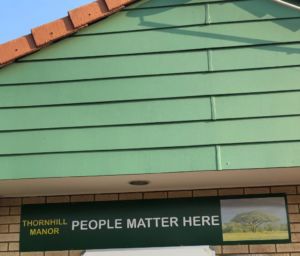 People matter at Rand Aid retirement village Thornhill Manor, which is why the phrase ‘People Matter Here’ has been adopted as the village motto.

It was coined by the new village chairman, Dr Dave Webster, who discussed it with the rest of the village committee. They decided it would be a great motto for the village because it captures the essence of what the residents and staff deem important – which is the people who call the village home, the staff members who work there and the visitors who come calling.

“The motto is in line with Eden Alternative principles, which the village and staff are very passionate about,” says deputy village manager Jackie Scott.

The Eden Alternative is a small, not-for-profit global organisation making a big difference in the world. The core belief is that ageing should be a continued stage of development and growth, rather than a period of decline.

In line with the ‘People Matter Here’ approach, Thornhill Manor’s village committee has decided to issue a monthly newsletter called the Gazette, which will contain news about the residents’ successes, achievements, challenges and ideas.

The Gazette will complement the weekly and monthly newsletters compiled by the village’s management team.

Thornhill Manor is a sought-after retirement village in a country-style environment, situated in the historic area of Modderfontein. It currently has two and three bedroom units for sale. If you are interested in viewing a unit, gaining further information, or wish to purchase, please contact Jackie Scott or Esme Erasmus on 011 608 2480 for assistance. All enquiries welcome.

Thornhill Manor’s new motto has been printed and erected at the village’s entrance way.