Social worker and dementia expert Debbie Beech explained how emotionally charged the decision is to place a loved one in a care centre, when she took part in a panel discussion on aging on September 17, as part of eNCA’s health and science focus hosted by Uveka Rangappa.

The programme was aired to raise awareness of dementia ahead of World Alzheimer’s Day, marked annually on September 21.

Beech is a social worker at Rand Aid Association’s Ron Smith Care Centre in Lyndhurst, Johannesburg. In May, the care centre became the first organisation in Africa to achieve Milestone Two on the Eden Alternative Registry. Eden Alternative is a global movement toward recognising aging as a continued stage of development and growth and not as a period of decline.

“People should not feel guilty when a loved one is relocated to a care centre,” says Debbie. “The reality is that family members feel guilty for wanting to have a life. When you are caring for someone who is ailing, that becomes your life – your existence revolves around ensuring that their needs are met. This often leads to carer fatigue or burn-out,” she says.

“Usually, families are in crisis when they come to us. There has inevitably been an incident, such as a fall or fracture, that made them arrive at the point where they finally acknowledged they are no longer able to care for their loved ones without professional assistance.”

She says that families often feel they are abandoning their loved ones when, if fact, the relationships between the person living with dementia or needing full-time care and their loved ones usually improve when the elder is settled in a care centre.

“This is because both party’s stress levels are reduced. Instead of worrying if their loved one has, for instance, eaten or bathed, they can come and visit and spend quality time together, creating treasured moments, comforted that their loved one is being taken care of in the best possible way,” says Debbie.

She explains that Ron Smith Care Centre has over 130 residents and, in addition to general frail care, offers specialised dementia care. The care centre has beautiful lounge and outdoor areas and a coffee shop that enables family members and friends to visit with residents in comfortable and inviting spaces. “Do not think that because your loved one is frail or has dementia, you cannot sustain a positive relationship.

“As an Eden Alternative-registered care centre, we work from an individual point of view, catering for the individual needs and wants of each resident, rather than using an institutional, one-size-fits all approach.

“It is important that we know the likes, dislikes, habits and histories of our residents because this information can explain certain of their behaviours and enable us to tailor a care approach that best suits them. This knowledge is particularly helpful when the speech of a resident is affected.”

Debbie says that knowing the preferred routines of a resident also goes a long way to making them relaxed and comfortable. “You may have a person living with dementia who battles to communicate and fights you every bath-time because you bath her first thing in the morning when throughout her life, she has bathed in the evening.

“It is crucial to try and find out why a resident is being ‘difficult’ because there is usually a reason and once you understand that, you can adapt their care routine and will generally find the resident becomes much more content.”

Debbie says there is a perception that people in care centres are bedridden when, in fact, they are often up and about. “People living with dementia are physically quite healthy but mentally, the dementia has taken its toll and they no longer have executive function, which means they are no longer able to make reasonable decisions.

“We have residents living with dementia who stay with us for a number of years and do very well within the structure and flexible routine we offer.”

While on the eNCA show, Debbie spoke about the reluctance of society to talk about the death of loved ones and what to expect.

“There is a stigma attached to talking about end of life and end-of-life care. At Ron Smith Care Centre, we have those difficult conversations with the families, to prepare them and make sure their loved one is comfortable and dies with dignity.

“Dementia is a terminal illness and at the end, the brain starts shutting down.”

The important thing is palliative care, she says, which involves providing relief from pain and other distressing symptoms; affirming life; acknowledging dying as a normal process; and integrating the psychological and spiritual care of the resident.

“It is about helping the person die with dignity. A good life deserves a good death,” she says.

Debbie started working at Alzheimer’s SA in 2015 as their regional manager for Gauteng. During this time, she did the Wits Certificate Course on Nursing and Dementia. She also completed the online course Preventing Dementia, through Wicking University in Tasmania.

In 2018, Debbie represented South Africa at a workshop on advocacy in London, through Alzheimer’s Disease International. Ten countries were represented.

“Dementia is definitely not addressed enough in South Africa. One of the results of attending the London workshop was starting the process of developing a National Dementia Action Plan.

“Unfortunately, South Africa sees dementia as a mental health issue and illness but it is actually defined as a non-communicable disease in most other countries of the world. The end result is that there is no defined department within the Health Department that deals with dementia, which is one of the five leading causes of deaths in the world and the leading cause of death in the United Kingdom.”

For more information about Ron Smith Care Centre, which offers a variety of accommodation options for frail, dementia and recuperative care, visit www.randaid.co.za Hand’s on fun with tasty ending 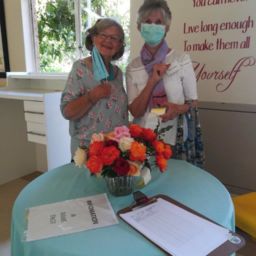 Elphin Lodge showcases its many activities

Rand Aid retirement village Elphin Lodge residents were as busy as bees in a blooming garden on Saturday, October 10,… 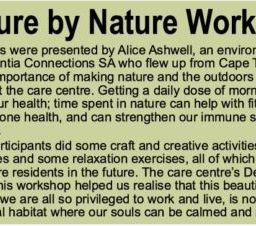 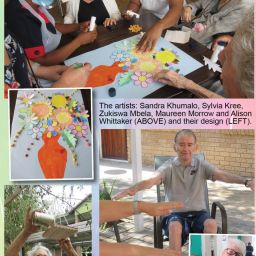 All aboard! Inyoni Creek gets moving

A bright, metallic red golf cart is set to become a familiar sight on the streets of Inyoni Creek village…. Rand Aid unites in the face of adversity People who abuse drugs or alcohol often do so to cope with anxiety, depression and other mental health issues. A… Golda Brittany, who will be 93 in June, and husband Mike, who is a year younger than his wife, are… 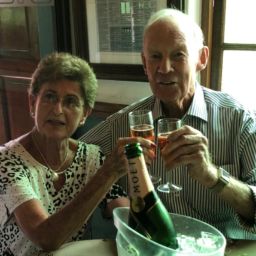